Rounding up the Fastest 5 Routers for 2018

It doesn’t matter if you’re a hardcore gamer or the occasional online shopper; no one enjoys lag. There are plenty of things that cause internet lag, but cheap routers are often at the heart of the problem. That’s why we’re rounding up the fastest routers for 2018. We tested several routers in our search for the most rapid routers. Nothing under 200Mbps would make the fastest router list, but they also needed to operate or have the option at least, on the 5GHz spectrum. We tested each router at various distances for upload and download speed. They needed to be fast to make our list, but not if you have to sit next to the router to enjoy fast speeds. Making a list of the fastest routers for 2018 was our goal, so price and design were secondary concerns. The primary focus was on speed and coverage.

This router is one of the fastest, most affordable routers tested. If you’re within 20 or 25 feet of this router, upload and download speeds are fast. If you stray too far outside that range, they can drop a little, so if you’re using this as your primary router in a large home, it may not be ideal. Walls and doors can limit coverage as well. Our favorite thing about this router was the price. It comes close to matching the other routers we tested at a more affordable price. Beyond price, the router firmware was intuitive and easy to use. It also includes an iOS app for easy configuring using a MAC. A few things we don’t like include the standup design and the LED lights. Standing routers aren’t any less useful than flat models, but they take up more space and are easier to knock off. The LED lights are bright, and in a dark room, they are a bit annoying. Neither of these issues is cause to ignore this excellent, speedy router. Let’s look at the technical specs:

Sitting next to the router, it hit the maximum speeds possible on the 2.4GHz frequency. On the 5GHz spectrum, the AC1900 did not disappoint. It averaged 290Mbps download at 10 feet and almost 400Mbps upload at the same distance. Wired speeds exceeded 500Mbps for both upload and download tests. At $89.99 on Amazon, you just can’t beat this router for speed and price. 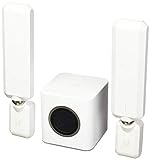 AmpliFi HD WiFi System by Ubiquiti Labs, Seamless Whole Home Wireless Internet Coverage, HD WiFi Router, 2 Mesh Points, 4 Gigabit Ethernet, 1 WAN Port, Ethernet Cable, Replaces Router & WiFi Extenders
Shop now at Amazon.com
This isn’t a traditional router, but since speed is the goal we included it in this list. In tests, it pounded its way to the top five easily. It’s a mesh networking system. The router acts as a base with multiple extenders you can plug in around your home to improve coverage areas. You can buy extenders to use with any router, but this system comes with extenders to help create the mesh. It’s always a good idea to use products that are made for each other or designed for synergy. At first glance, the AmpliFi HD looks like a gimmick or something you’d find on the impulse purchase rack in your favorite department store. After testing it, all thoughts of tricks and gimmicks disappeared. We like the design in spite of it being a cube. It performs well at all ranges. The router firmware is easy to navigate, and there’s an app to manage settings. It’s a complete home WiFi solution. The price is a bit high, but it comes with extenders which offsets the cost. Setting up the router is easy whether you use the internal software or the app, but it lacks some core features we prefer to see in a router. There’s no way to change firewall settings or setup QoS rules. QoS rules help routers deal with everyday issues like latency, errors, and different traffic. Most routers have some way of changing firewall and QoS settings in case you need to allow specific software to use more, or less, bandwidth. About the technical specs:

Typical tests and benchmarks don’t apply to the AmpliFi HD. Since it has extenders, almost anywhere in your home can be right next to the router. Speed is the only test that applies in this case. On the 2.4GHz frequency, the AmpliFi HD performed well and hit the fastest rates you would expect from 2.4GHz. The 5GHz frequency performed at higher than expected speeds. Upload speeds hit 390Mbps, and download speeds averaged 540Mbps, even when tested from outside. The price on Amazon is $329.99. That’s a lot of money to spend on a router. To make up for the higher cost, the AmpliFi HD comes with two extenders you can plug in around your home to extend the coverage. It has a handy touch screen display which is an unusual feature in a router, but this is a unique router. 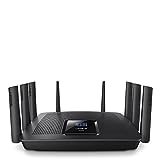 Linksys EA9500 Tri-Band Wi-Fi Router for Home (Max-Stream AC5400 MU-Mimo Fast Wireless Router), Black
Shop now at Amazon.com
This router is pricey if you want to get the extenders with it. Extenders are a must have if you have a large home or need better WiFi upstairs. It’s $449.94 on Amazon if you buy the AC5400 bundle which includes an extender. When you consider the technology, range, and speed of this router, $449 if not a lot of money. If you’re a gamer or heavy streamer, the AC5400 will impress you compared to any budget router or stock router supplied by your ISP. We liked that the AC5400 has MU-MIMO technology. It lets us know Linksys wants this router to work anywhere in the house and continue to provide us with high-speed internet in the future. MU-MIMO helps ensure your router works anywhere and you always get the fastest connection possible by using multiple antennas, multiple inputs, and various outputs. The only things we didn’t like were the price and the design. It’s worth the money, but it’s still a high price for a router unless you plan to use it for gaming or streaming. The design is bulky, and it has antennas everywhere. The antennas are part of why this router works great anywhere in your home, but they also mean it will need its own location preferably in the open. Let’s dig into the technical specs:

Speed tests left us thinking this router is for 5GHz only. On 2GHz it performed well enough but averaged only 100Mbps download speeds and 90Mbps upload speeds. However, using the 5GHz frequency, it downloaded at a blazing 300Mbps and uploaded at the same rate. The speeds were consistent if we tested next to the router or 20 feet away.

NETGEAR Nighthawk X6 Smart Wi-Fi Router (R8000) - AC3200 Tri-band Wireless Speed (Up to 3200 Mbps) | Up to 3500 Sq Ft Coverage & 50 Devices | 4 x 1G Ethernet and 2 USB ports | Armor Security
Shop now at Amazon.com
Netgear’s Nighthawk routers tend to be more budget friendly when compared to similar routers on the market. The Nighthawk X6 is $255.67 on Amazon if you get the bundle that includes a WiFi extender. If possible, and you live in a large house, always get an extender made by the same company as your router. There’s no technical reason, but we find they work better than aftermarket extenders. We liked all the bonus features this router incorporated. Netgear’s Genie software makes setup easy and future changes less difficult as well. The slimmer design is refreshing. Many routers that feature multiple antennas are bulky with some being larger than a modern gaming laptop. It met expectations for speed and reliability. There are flaws with this router, but none of the flaws are critical flaws. The antennas are fragile, so they could break off if you aren’t careful. They fold into the top of the router, but the hinged area isn’t sturdy enough for our tastes. Most routers are quiet, but the Nighthawk X6 make noises similar to an older, external USB drive when it was booting up. On to the technical specs:

The Nighthawk X6 performed well on the 2.4GHz frequency. Upload speeds were faster than download speeds at 85Mbps and 60Mbps respectively. These speeds aren’t high for 2.4GHz, but most users won’t notice. Gamers and streamers will find 2.4GHz speeds limiting on the Nighthawk X6. If you usually have more than one person streaming or gaming at any point, you’ll get some lag. Switched to the 5GHz frequency, the NightHawk X6 proved itself worthy of the fastest routers for 2018 list. It averaged 220Mbps download speeds and 270Mbps upload speeds. Those speeds would allow for almost any gaming or streaming needs with very little chance of lag becoming an issue. Oddly, the wired speeds for this router were slower than the wireless speeds, but only by a few Mbps.

Linksys WRT3200ACM Dual-Band Open Source Router for Home (Tri-Stream Fast Wireless Wi-Fi Router, MU-MIMO Gigabit Wireless Router)
Shop now at Amazon.com
Linksys makes a wide range of routers from budget-friendly routers to high-end, less budget-friendly routers. The AC3200 falls in the middle on price but climbs high on the list of features and performance. At $229.97 on Amazon, this router is budget friendly. It performs like a router you’d expect to cost $500 or more. We realize it’s technically not a feature, but the router is blue and black. That’s a plus in a sea of black or white routers. Linksys includes software called Smart WiFi which makes everything you do with the router easier. Setup is comfortable, and the router is lighter than most highspeed routers. Netgear also manages to include a dual-core processor in this budget-friendly router. There are a few things we didn’t find appealing. The antennas tend to become loose over time and may not perform well if they are loose. It’s not paired with any extender made for this specific router which limits coverage in larger homes especially those with an upstairs or basement than needs wireless internet. On to the technical specs:

As expected, on the 2.4GHz frequency this router hit download speeds up to 75Mbps and upload speeds that were faster than download speeds. Upload speeds averaged 100Mbps which is fast for the 2.4GHz spectrum. The speeds dropped about 5 percent when tested at 20+ feet and fell another 30 percent at 30+ feet. An extender would make this router more appealing, and there are multiple aftermarket extenders help performance at longer distances. Test on the 5GHz frequency made up for the slower 2.4GHz tests. This router performed at speeds averaging 460Mbps for downloads and 490Mbps for uploads. That was a lot faster than we expected after the slower 2.4GHz tests. Speeds suffered similarly to the 2.4GHz results as we increased the distance between us and the router.

The only reason the Linksys Max-stream beat out the Linksys WRT AC3200 Open Source Dual-Band Gigabit Smart Wireless Router for the top spot was the poor performance on the 2.4GHz frequency. Either router would work great for anyone from households with massive streaming needs to the average internet user looking for better movie streaming on weekends.

Crushreviews.com is a participant in the Amazon Services LLC Associates Program, an affiliate advertising program designed to provide a means for sites to earn advertising fees by advertising and linking to amazon.com.
This website uses cookies to ensure you get the best experience on our website. Learn more.